The strip out of the property is now complete and the lower ground floor flat has been fully tanked to include the external meter cupboard. We will be installing an exchange heating system rather than a gas boiler, resulting in a greater initial expenditure but the overall running costs will be cheaper.

Orders for the kitchens and bathrooms have now been placed with expected delivery dates, allowing for the August holidays, early in September. Replacement Sash windows have been ordered and will be fitted towards the end of August.

The Chimney breast has been blocked up from the ground to the third floor and to the rear of the lower ground floor flat the Chimney breast has been removed.  With the steel now installed, the walls in the ground floor flat kitchen have been built, together with the main drain run under the building being upgraded to 150mm, with the soil pipe connections made either side of the building.

The rear scaffolding has been taken down so that TSG can complete the foundations and start to build the rear extension. The scaffolding will be re erected on completion in order to carry out work to the roof etc.

Progress has been slower than expected, as we have had to repeatedly adapt the layout of the studios to comply with local authority space requirements. We have now fitted sole plates showing the exact position of the walls and doors. Space is at a premium so every square inch has been utilised, including the loft space. Unfortunately this has delayed the projected by 4/6 weeks and TSG have advised that the overall development will be completed by the beginning of December 2015. 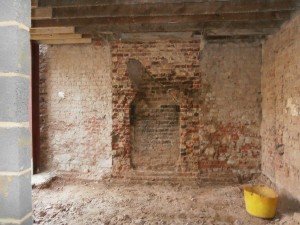 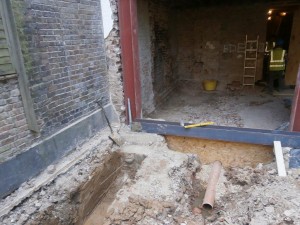 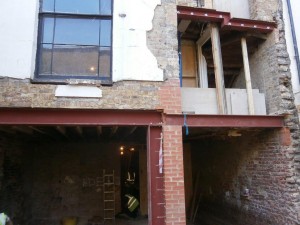 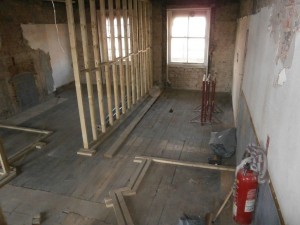 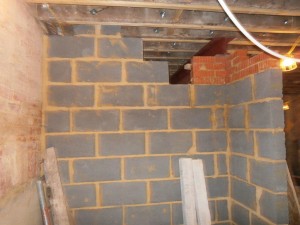 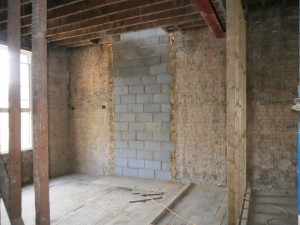